Lydia and I trundled our suitcases out of the hotel and caught a cab to the building where we were to collect the keys to our Pet Friendly Apartment.

Magazine sections of various publications had assured us renting an apartment from a sub letting website is the new way to travel. Had we been naive to pay a month’s lease upfront? This was New York, after all.
I pressed the buzzer. No response. We gazed up at the office tucked away like an eagle’s nest on the eighth floor. It was Easter Sunday. Would we be spending the night shivering on a bench in Central Park?

I fumbled for my phone. Eva said she’d be down shortly.
Eva’s offices were reassuringly sleek in an Ikea meets Big Apple way. She explained the previous tennant was in the process of moving out of our apartment, but wouldn’t mind if we left our luggage there until after he’d left and the cleaner had been around 4pm. If there were any problems Eva said, handing us the keys, feel free to call.
The first problem occurred sooner than expected. The elevator to her office was frozen. Fortunately, Eva’s team were friendly enough to help us down eight flights of stairs with our bags. We joked we were lucky the elevator hadn’t broken five minutes sooner. Being trapped in there for the rest of Easter would’ve been a laugh a minute.
After a short taxi ride across town, we reached the red door of our Pet Friendly apartment block. The neighbourhood was everything we’d hoped for – characterful yet quiet. As Lydia lugged the heaviest of our bags up three flights of stairs, I was grateful to be travelling with a fit 27 year old. Burdened with even the smaller bags, my chest tightened after the second flight.
A dark-haired young man answered the door and smiled. Sitting on the bed in the background a woman was stuffing clothes into a backpack. Cartons, sheets, empty bottles and shopping bags were strewn across the floor. He offered us a cupboard to stow our bags. We accepted and scurried away.
With three hours to fill before 4pm, we wandered chilly streets. The sound of drumming and raucous music drew us to an empty lot where hundreds of people were dancing and smothering each other in brilliantly coloured paint powder. Their laughter and the warmth of their bodies was a magnet after the anxiety of recent hours. Before we knew it we were dancing with them and being smothered with paint. 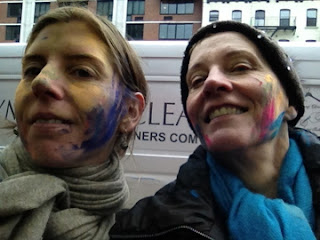 When our energy wore thin we left the throng and examined ourselves. Lydia’s face was mostly yellow with a touch of purple. Mine was red with shades of blue. I reached for a tissue. The paint refused to budge. We no longer resembled ideal tennants.

“Maybe we should go to a movie?” I said, thinking we could hide in the dark for a couple of hours

Lydia thought we should find somewhere to buy bath towels (our apartment provided sheets but no towels). We walked toward Bloomingdales. When Lydia approached a conservatively dressed couple, the old man scowled and shooed us away.

I was relieved Bloomingdales was closed. Our face paint would be too much for snooty shop assistants. We eventually found a homely store that sold towels. After that we filled in time with an Italian mother and daughter in a Starbucks. The daughter wanted to know where we’d had our colour job done. The mother wasn’t so keen.

“You two look like zombies,” said the taxi driver who took us back to our apartment.

It was 4pm. We were tired and ready to unpack. Instead, we were confronted by an appalling mess. The previous tennant and his girlfriend appeared to have been holed up in there on a month long sex and drugs binge.

We rang Eva. She said the cleaner had been delayed and wouldn’t be there til 8pm. We washed our faces and went out for dinner. When we returned at 8.30 the cleaner had just started. We helped her, sweeping, dusting, replacing the shower curtain.

“I shouldn’t be here!” she moaned.”I should be at church.”

It was 9.30 by the time she left. Our apartment was finally habitable.

With shiny floorboards and a vase of flowers on the table it’s looking quite normal now.

Maybe it’s Pet Friendly because some people live like animals.

PackingUncategorized
Welcome Bono. How fostering a cat in New York can be a key to the city’s heart.Uncategorized