As one at the pinnacle of the food chain I can count the number of enemies on the pads of one paw.

Apart from the big grey cat down the road, a few fluffy white dogs and the terrifying weapon humans laughingly refer to as “the vacuum cleaner”, nothing offers serious challenge.

That is until I met THIS buffoon! I was having a relaxing sunbathe on the deck of the holiday house by the sea when he swooped on to the rail and warbled at me. His tone was mocking in the extreme.

Now I’ve had the upper hand with the bird species for some time. So I lunged at him…but he didn’t ruffle a feather. He just perched there and fixed me with a superior glint.

It was then I realised he was bigger than any bird I’d seen before. In fact, he probably outweighed ME. This creature was a fighter jet plane with feathers.

He flourished a deadly claw, as if to say “try this for size, Buddy!”

He made a clucking noise that resembled scornful laughter. Even if I braved the claws, that beak was a dagger.

“Met your match, have you Jonah?” said Scribbler. She can be sooo unwitty at times.

I decided the only way to get through this holiday was to pretend Darth Vador of the skies didn’t exist.

My plan failed when they insisted on having barbecues on the deck. Guess who came to dinner?

Whenever Man tossed me a morsel from the grill, that puffed up idiot swung off a nearby gum tree and tried to steal it.

I was disgusted when Man had to intervene to save my dignity. I prefer to take care of myself thank you very much.

I was hugely relieved when they finally packed me and my litter box in the car and drove me home again. 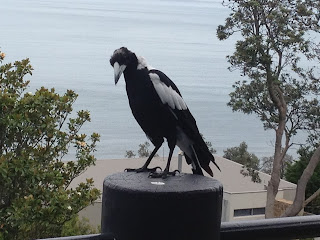 This error message is only visible to WordPress admins

Error: API requests are being delayed. New posts will not be retrieved.

Error: API requests are being delayed for this account. New posts will not be retrieved.